Audrey Parsons is a strong, powerful singer. She started her singing career in the Cape Town band, Sylk before joining ‘Cinema’, a very popular South African recording band in the ‘90’s. After a year with the band, she decided to rejoin her family in England. She performed in the UK as a solo artist, becoming very popular and wowing audiences under the name, ‘Nikita’. She recorded two songs, penned for her and recorded by John Myles (of ‘Music was my first love’ fame). She traveled the UK and Oman extensively. Upon returning to South Africa, she met up with Craig and joined Scandal, with whom she has been ever since. With her powerful voice, stunning good looks and a very sexy appeal, she quickly has audiences eating out of her hands.

The Northern Line Soul band will play all the classic soul/motown songs you remember from your youth – The Temptations, The Isleys, The Supremes, The Elgins, Martha Reeves, Fontella Bass , Edwin Starr, Dobie Gray – BUT ALSO Northern Soul dance floor fillers from R Dean Taylor, Dean Parrish, Judy Street, The Contours, Frank Wilson, Chuck Woods, Gloria Jones, Guy Darrell – songs that make you smile, songs that make you want to dance all night, songs that make you think “wow, i haven’t heard that for years – what a great song, what a great band!” check out our set list to see what we mean! – J.J.Barnes – “Our love is in the pocket” – THE quintessential Northern Soul dance floor filler – when was the last time you heard that played to perfection by a live band? or what about Betty Everett’s “Getting mighty crowded” – 1965 – the one song that supposedly kicked off the whole Northern Soul scene – we love every song we do with a passion that sometimes hurts! This year we have relaunched with a brand new show – STEVENS AND KNIGHT – Covering music from the West End & Broadway to swing, soul, pop, jazz and classic hits. Sound and lighting to suit all sized venues and a repertoire that caters for every age and taste. 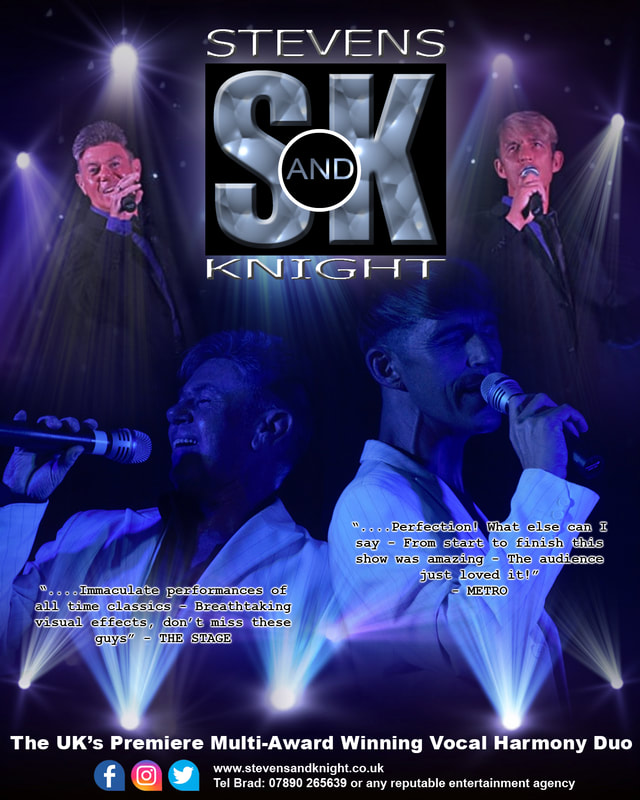 The inimitable SUZIE SUIT brings you her one woman show full of classic pop moments all performed in an entirely unique way.

Connor O’Neil is a Charismatic vocal entertainer and one of the UK’s premier wedding entertainers, with a huge range of songs, styles and genres up his sleeve.

Formed from two established solo artists, Rock & Rose are a BRAND NEW duo who aim to bring happiness with their music and love of harmony!
Whether it be an original song written by them, or their unique take on a classic cover, you can be assured that it will be classy, elegant and different from the rest!

Spending 6 years as a guitarist/backing vocals with Chesterfield band HAL and a further 5 years as lead guitarist and joint lead vocalist in the band Exhale, Vinny certainly has lots of experience in the business.